We are now taking enrolment for September 2022.
For further information on lessons email: info@sligoacademyofmusic.ie
Please click on this link to complete our enrolment form https://forms.gle/97tjMPx1jMvAgifn7

Our students and teachers have come together with our colleagues around the country using the universal language of music to welcome new citizens arriving in Ireland. To the thousands of refugees arriving from Ukraine and refugees from other war torn countries who have made their home here, we welcome you all to get in touch if you would like to study or make music together in Ireland.

We are so proud of our former student and tutor Nils Kavanagh who won The Inaugural Young Irish Jazz Musician performing his own composition No Expectations and an arrangement of Stella By Starlight. Such an incredible achievement well done. 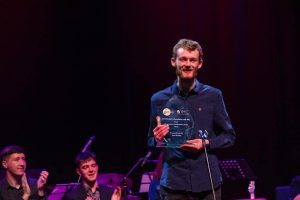 Congratulations to our tutor and former student Eddie Fitzpatrick who has been selected to play with the Irish Youth Wind Ensemble in 2022. 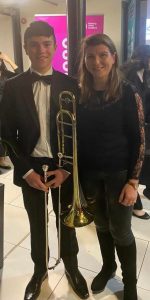 Our Jazz Orchestras raised a whopping €1,634 for the Northwest Hospice in Quayside Shopping Centre. Well done everyone and thank you for your generosity.

At the end of June, sixty four members of the Sligo Academy of Music left for New York, in a tradition of travel that spans seven years, performing in locations such as  Amsterdam, Budapest, Paris, Prague, and most recently New York. Some of the Academy’s many musicians were to play together on this trip, the two groups being the SAM Sinfonietta and the SAM Jazz Orchestra, conducted by Niamh Crowley and Con Schmaucks respectively.

On the first evening the orchestra were hosted by Ronan Downes at his Route 66 Smokehouse restaurant in the heart of Wall Street, and just as night began to fall and with the city still buzzing,  Ronan’s son Thomas gave the group a tour of the area, through the towering  buildings and the stately monuments, then onto the 911 memorial as the final stop for the day.

Their first engagement on Saturday was to play a concert on Coney Island. Both orchestras performed for the public; the Sinfonietta playing a lively, slightly jazzy programme filled with classic Mancini pieces such as The Pink Panther and Peter Gunn, and a few Irish touches also, in Riverdance and An Irish Party in Third Class; while the Jazz Orchestra worked through a remarkable spread of swing, funk and latin big band jazz. The programme lasted around an hour, leaving the remainder of the morning to the Coney Island Amusement Park; the music stands were barely put away before the brass section were hurtling through the air on the numerous rollercoasters. A quick stop to drop the instruments at the hotel, and then the musicians hurtled through the air in a much more dignified manner, in the elevators of the Rockerfeller Centre to The Top of The Rock, where they saw the full range of the cityscape of New York. To follow this iconic view of the city, the group walked to the bustling Times Square, where they dined at the Hard Rock Café and visited Madame Tussaud’s.

Sunday morning the orchestras travelled to the USS Intrepid Air and Space Museum for their second performance. With the Sligo flag flying proudly beside them, in a sweltering heat that leant a beautiful rich sound to the brass and woodwind, the orchestras played a slightly longer programme to an appreciative public, as well as supporters of the trip and relatives of the players. Sligo native Gerry McGwynn who was an invaluable help to the orchestra in organising the concert tour was in attendance as well as Chris Cawley (President of the Sligo Association of New York) and members of the  Sligo-New York  Football  Club. After exploring the wonders of the museum the orchestras attended the Broadway musical School    of Rock.

Their ears were still ringing with that sound distinctive to Broadway, when the next morning both Jazz and Classical orchestras took part in a Broadway Orchestral Workshop, where they studied a selection of pieces from past Broadway scores. The masterclass was led by   legendary conductor and composer Michael Dansicker (who has arranged the scores for High School Musical, Elf, Analyse This to name a few) alongside the equally accomplished    director and choreographer Michael Watson. Friend Like Me from Aladdin was studied intensively, with respect to rhythmic intricacies and technical power, but for the most part   they worked on how to dance while playing. To round off these fantastic few hours, there was time for questions with the guest appearance of 2 time grammy award winning jazz musician Ryan Truesdell. The workshop was the highlight of the trip for our musicians.

It was not long before they were on a boat for Ellis Island to see the Statue of Liberty. They arrived at JFK close to seven that evening to discover the flight was delayed by over eight hours. What else would be the response of the intrepid musicians but to open up their instruments and entertain the departure hall for a couple of hours!

This brought to a close a magical few days of music making. We are so grateful to everyone who helped to make this once in a lifetime experience a reality for the students of The Sligo Academy of Music.