Back to All Tutors 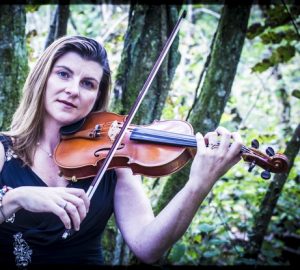 Niamh, a native of Rosses Point, began her musical training at the age of four and attended the Royal Irish Academy of Music continuing her studies at the Royal College of Music, London with the celebrated Israeli violinist Professor Itzhak Rashkovsky. She graduated with a first class honours degree and subsequently a postgraduate in performance as a Senior Exhibitioner and holder of the Beckwith Music Scholarship. She was awarded the centenary Tagore Gold Medal for the most outstanding student at the College which was presented to her by Prince Charles. On his first visit to Sligo in 2015 Niamh was invited to perform a specially commissioned solo and was also honoured to perform for the state visits of President Michael D Higgins in the Royal Albert Hall and Queen Elizabeth at the Convention Centre in Dublin.

Niamh has a busy freelance career performing with Michael Bublé, Andrea Bocelli, José Carerras, Westlife, Sinead O’Connor, The Stunning, The Hot House Flowers, Il Divo and Colm Wilkinson to name but a few and toured extensively throughout Europe, North and South America and Asia. She has worked with many leading national ensembles including the Irish Chamber Orchestra, Camerata Ireland, the National Symphony Orchestra and the RTE Concert Orchestra.

An experienced soloist and chamber musician Niamh broadcasts regularly on television and radio including The Late Late Show, Fleadh TV, TV AM and Sunday Miscellany. Niamh enjoys a close working relationship with professional musicians of every genre in Sligo as a key member of the production team for the legendary Kieran Quinn Theme Nights with regular sell out performances in the Hawk’s Well Theatre, Vicar Street and The Sugar Club.

She has been involved in musicals throughout the country from a very early age as both performer and musician. Niamh has taken on the role of musical director for innumerable shows since 1999 and currently enjoys this role with The Sligo Fun Company, Pop Up Theatre Company, The Mad Ravens, Sligo Musical Society and The Ursuline College.

As the founder and Director of the Sligo Academy of Music she conducts 2 of the Academy’s 4 orchestras and has brought them to perform in New York, Paris, Budapest, Prague and Amsterdam as well as nationally including the National Concert Hall. Niamh finds it so rewarding to see her vision come to life -fostering a lifelong love and appreciation for music by providing quality music tuition and performance opportunities for all, in an environment that encourages creativity and excellence and encourages students of all ages to achieve their musical goals.