Back to All Tutors

Lorraine has been teaching flute, recorder, theory and ensemble with the Sligo Academy of Music since 2010. She is 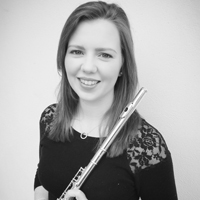 from Sligo and has had a keen interest in music from a very early age. Lorraine is a past student of the Academy and began her flute studies with the late Freya Gillan.

She continued her musical studies at Queen’s University Belfast, where she majored in performance and graduated with a first class honours music degree. She studied flute with Libby Bennett, a member of the Ulster Orchestra and had the opportunity to partake in many masterclasses and performance groups during her time there. Lorraine also received a Diploma in performance from ABRSM. On completion of her time in Queen’s University Belfast, she was accepted to study at the Royal Irish Academy of Music where she studied Music Teaching and Performance. Being taught by Prof. William Dowdall for flute and Patricia Morris for piccolo, she was given a lot of great musical opportunities for performance and tuition.

Lorraine has a keen interest in chamber music and has participated in various orchestras and ensembles both locally and abroad. She has played at numerous Informal Music Afternoon’s with the Sligo Baroque Orchestra and continues to do so. Other orchestras she has been a part of include, Queen’s University Symphony Orchestra, the Royal Irish Academy of Music Symphony Orchestra, Sligo Concert Band and the Manhattan Wind Ensemble.

She has won many awards and competitions in Ireland and in 2009 had the privilege of performing for former President of Ireland, Mary McAleese in the National Gallery of Ireland. Along with studying under some of the best flute teachers in Ireland, she has participated and attended masterclasses with Barbara Gisler-Hasse, Romolo Balzini, Randy Bowman and Sir James Galway.